In my last couple of posts I mentioned some of the things I’ve been doing to help pass the time during quarantine. Since then I have found another new hobby: making masks. It’s practically impossible to find disposable masks anywhere unless you’re a healthcare or food service worker so I made a couple of my own for those times where I am forced to be in public. Luckily I already had lots of fun fabrics on hand for this project!

Check out my Avengers and Explodng TARDIS masks!

In addition to creating masks, I’ve been working my way through a couple of books. I just finished Harry Potter and The Deathly Hallows last week. (Yes, I read it again. Stop judging me!) This week I’m reading Empire of Sand, which has been fantastic so far.

I also finished binge-watching Marvel’s Runaways. Even though the last season wasn’t quite as good as the first two, I still really enjoyed this show. I wish it hadn’t been cancelled already. I guess I’ll have to go re-read some of the comics to hold me over.

Did you watch Runaways yet (It’s available on Disney +)? Let me know what you thought!

About a month ago I began watching Marvel’s Jessica Jones on Netflix. It was a total whim. I’ve heard of it before, but didn’t really know what it was. Both Game of Thrones and Big Bang Theory had ended. I’d already watched all of Good Omens and Stranger Things season three hadn’t been released yet. I needed a new show to binge on.

About 20 minutes into the first episode of Jessica Jones I hopped on social media and demanded an answer: Why did nobody tell me how amazing this show is?!

Jessica Jones is a super-powered P.I. living in New York. She’s strong as hell, angsty as a person can be, and has an intimate relationship with the bottom of the whiskey bottle. Jessica is as flawed and real as they come, which is what drew me to her immediately. The show begins in the aftermath of Jessica’s escape from manipulative super-villain, Kilgrave. Even a year after his death, Jessica is still haunted by her time spent under Kilgrave’s control, in which he was controlling her mind and her actions, forcing her to do unspeakable things. 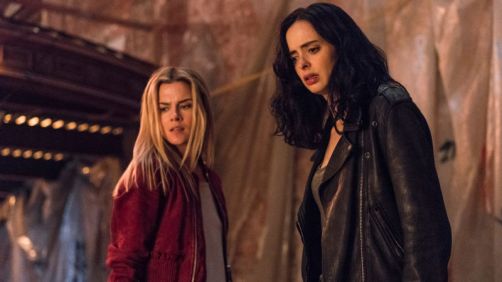 The cast of characters is exquisite. Patsy Walker, aka Trish, is Jessica’s adopted sister and famous television personality. Upon first meeting her, Trish looks like she’s going to be a boring, stereotypical “friend” type. But, oh, I was so wrong about that. The relationship between the two is a rather complex one and later becomes a huge part of the story line. (Those of you who are familiar with the world of Marvel comics will be delighted to see this crossover of Patsy Walker/Hellcat.)

Luke Cage (who also has his own show on Netflix) shows up in season one as a fleeing friend/romantic interest of Jessica’s. We’re also introduced to neighbor and ex-junkie, Malcom, crooked attorney Hogarth, and Jessica’s adoptive and emotionally abusive mother, Dorothy. Of all the characters we meet though, Kilgrave was by far my favorite.

David Tennant has been a favorite of mine since I was first introduced to him as the 10th Doctor. Even if I had never heard of him before, I would have immediately become a fan after watching his brilliant performance as Kilgrave. In my opinion, he’s possibly one of the most chilling villains in the Marvel universe. He has the ability to take over people’s minds, which, of course, he uses for horribly nefarious and twisted purposes. As if the psychological trauma of what Kilgrave did to her wasn’t bad enough, Jessica learns that it’s possible he’s still alive. Can she really trust anyone else, knowing that they might be under his control? Can she even trust her own judgement?

Seasons two and three were also fantastic (although season one was my favorite), with new superheroes/anti-superheroes and bad guys alike. We learn more of Jessica’s backstory and how she came to possess her powers. There’s incredible character development, not just with Jessica, but across the board. Relationships are explored, strengthened and broken apart. Mistakes are made. Lives are lost. Shit gets real. Through it all, Jessica remains the bad ass that New York can count on again and again, whether she wants it or not.

SPOILER ALERT. DO NOT READ IF YOU HAVEN’T FINISHED WATCHING SEASON 3!

Eleven and the gang are back for another season, only this time around there’s way more hair and bad outfits to go around. Everyone’s been busy since we last saw them: Eleven and Mike have been busy sucking face, Dustin has been off at summer camp, and Steve landed a job slinging ice cream at the brand spanking new mall, Starcourt.

Everyone is ready to have a normal summer, filled with teen love and angst when shit gets weird…again. Russian communists have infiltrated Hawkins and are trying to re-open the portal to the Upside Down, which had been closed by Eleven last season. On top of that, Max’s big brother Billy seems to be acting more douche-y than usual…

This season was amazing. I was worried that it was going to be lame, with all the teenage drama and whatnot, but I actually ended up liking this season better than the previous one. Despite the weird and sometimes horrific stuff going on, the writers managed to add comedy and lightness to this season that hadn’t been there before. (If you don’t know what I’m talking about, just watch any scene with Steve and Dustin.) The younger characters were a little more mature (except Mike, he was whiny and kind of annoying) and complex this time around, dealing with real-life issues that all teens experience: romance, strained friendships, boundaries, standing up for your friends, etc. There were some great new characters thrown into the mix, as well, like smart and sarcastic Robin. Of all the relationships we’ve seen evolve on the show, the big brother/little brother relationship between Steve and Dustin is by far my favorite. They are absolutely hilarious together and I just love them.

The girls were more front and center this time around, too, which I really liked. Eleven finally gets to have a somewhat “normal” life and figure out who she is. It was fun to watch the friendship blooming between Eleven and Max and see how much Eleven changes throughout the course of the season.

Overall, this season was a huge win for me. I have some theories on that last scene we saw and what it all means, but I guess we’ll  have to wait and see if there is going to be another season.

Are you a Stranger Things fan? What did you think of season 3?