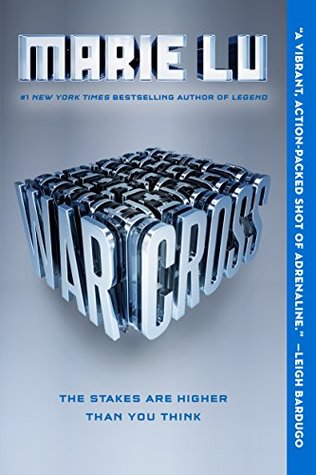 For the millions who log in every day, Warcross isn’t just a game—it’s a way of life. The obsession started ten years ago and its fan base now spans the globe, some eager to escape from reality and others hoping to make a profit. Struggling to make ends meet, teenage hacker Emika Chen works as a bounty hunter, tracking down players who bet on the game illegally. But the bounty hunting world is a competitive one, and survival has not been easy. Needing to make some quick cash, Emika takes a risk and hacks into the opening game of the international Warcross Championships—only to accidentally glitch herself into the action and become an overnight sensation.

Convinced she’s going to be arrested, Emika is shocked when instead she gets a call from the game’s creator, the elusive young billionaire Hideo Tanaka, with an irresistible offer…

Emika Chen is pretty down on her luck when she accidentally glitches into the biggest Warcross tournament in the world. To her surprise, her small mistake is a ticket to the streets of Tokyo and a personal relationship with Hideo Tanaka. Emika was a great protagonist, with her badass hacking skills and funky appearance. She made some really good decisions and didn’t get overly wrapped up in the potential romance blossoming in front of her, which made me appreciate her even more.

Hideo is a fascinating character. The chemistry, the frustration, and the mystery surrounding him made it hard to tell if you were supposed to love or hate him. (I’m pretty sure this was intended though.) I enjoyed getting to see his relationship with Emika unfold and present some unexpected surprises. I liked the other characters of the story, also, but to be honest none of them blew me away. We didn’t get to know any of them particularly well, but it didn’t seem to hurt the story.

This was such an intriguing read. The way Lu blends the modern world (at least, I’m guessing it’s somewhat modern. We’re never really told this.) with a world set in a virtual reality really blew my mind. At times I found myself envious of Emika, wishing that my own life paralleled that in which she lived.

The ending surprised me and left me yelling at the book. You know, because I didn’t want it to end yet. I may or may not have already rushed out to the bookstore and purchased a copy of Wildcard.